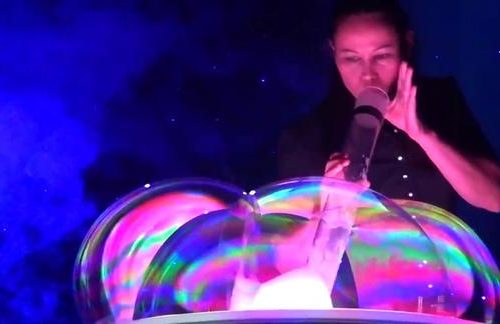 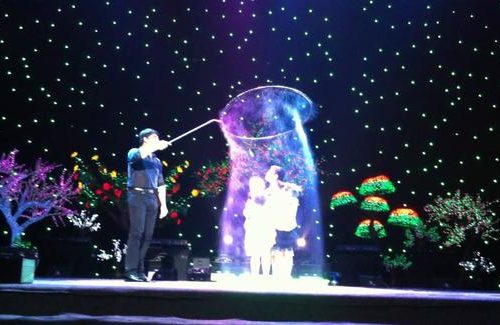 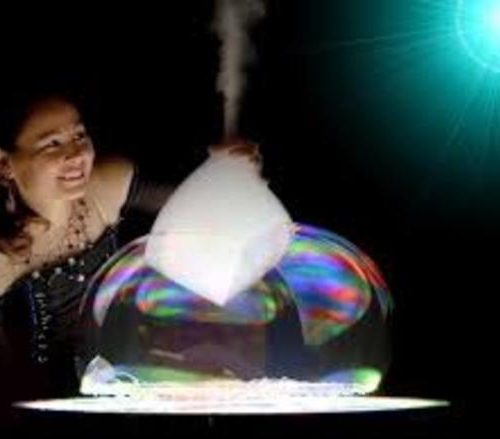 I recently revisited The Gazillion Bubble Show after seeing it both six and seven years ago, respectively. The Yang family– Guinness Record holders for more than a dozen bubble titles including creating the world’s biggest bubble at 179 feet long–have members switch on and off for different shows. There are often three a day, and each show goes a little over an hour. There is a fancy light show, filmed documentary footage of the Yang family on large screens on either side of the stage and plenty of smoke but the focus is on one bubblemaker and his or her bubble wands!

I saw the show with 50-year-old Ana Yang, who came here as a small child directly from war-torn Viet Nam. She learned the bubble trade from her soon-to-be husband and she makes jokes that while the English he taught her is not so good, her hubby taught her how to make some mean bubbles, LOL!

What makes the so o amusing and enduring! Well, while not exactly one gazillion bubbles are created (I gave up counting at about 1,000), each bubble trick is mesmerizing–whether Yang is covering the audience with thousands of tiny bubbles to the point where they cannot see each other, or she is putting a few cut kids in one giant bubble. She also can blow hundreds of small bubbles into one big one and even put smoke inside bubbles.

Yang has a great rapport with the youngster she brings onstage and they can get shy about climbing into her giant bubble, some even closing their eyes. (The bubble solution she uses does not sting, by the way.) Kids that participate in the act leave with a giant gallon size bottle of the official Gazillion Bubble Show formula. My nephew Frank got to go onstage with Yang and he is still talking about it nearly a week later. All members of the audience can have their photo taken in a giant bubble before or after the show for 20 dollars.

This is a show that is perfect for families and there is nothing else like it out there. You can often get discount ticket vouchers on Groupon and Living Social, so definitely check that out. (You can get away paying only $45 per ticket via those online channels.) For more info about this wondrous show at World Stages (50th Street and Eight Avenue), go to www.gazillionbubbleshow.com. Be prepared to get “blown” away!