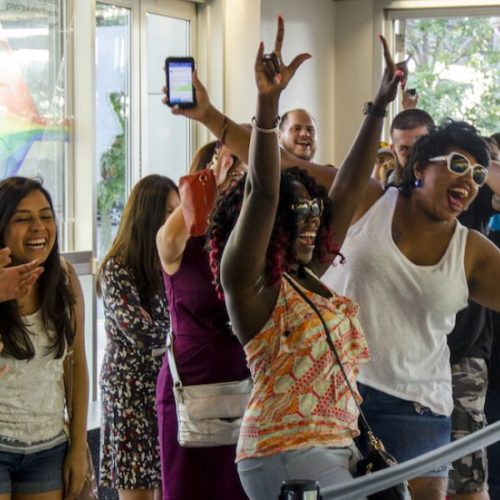 I was lucky enough to get to go to a Mom Trends influencers event at Liberty Science Center in Jersey City and I think that I had even more fun the kids attending! I have never been a science geek but this event brought out that side in me! 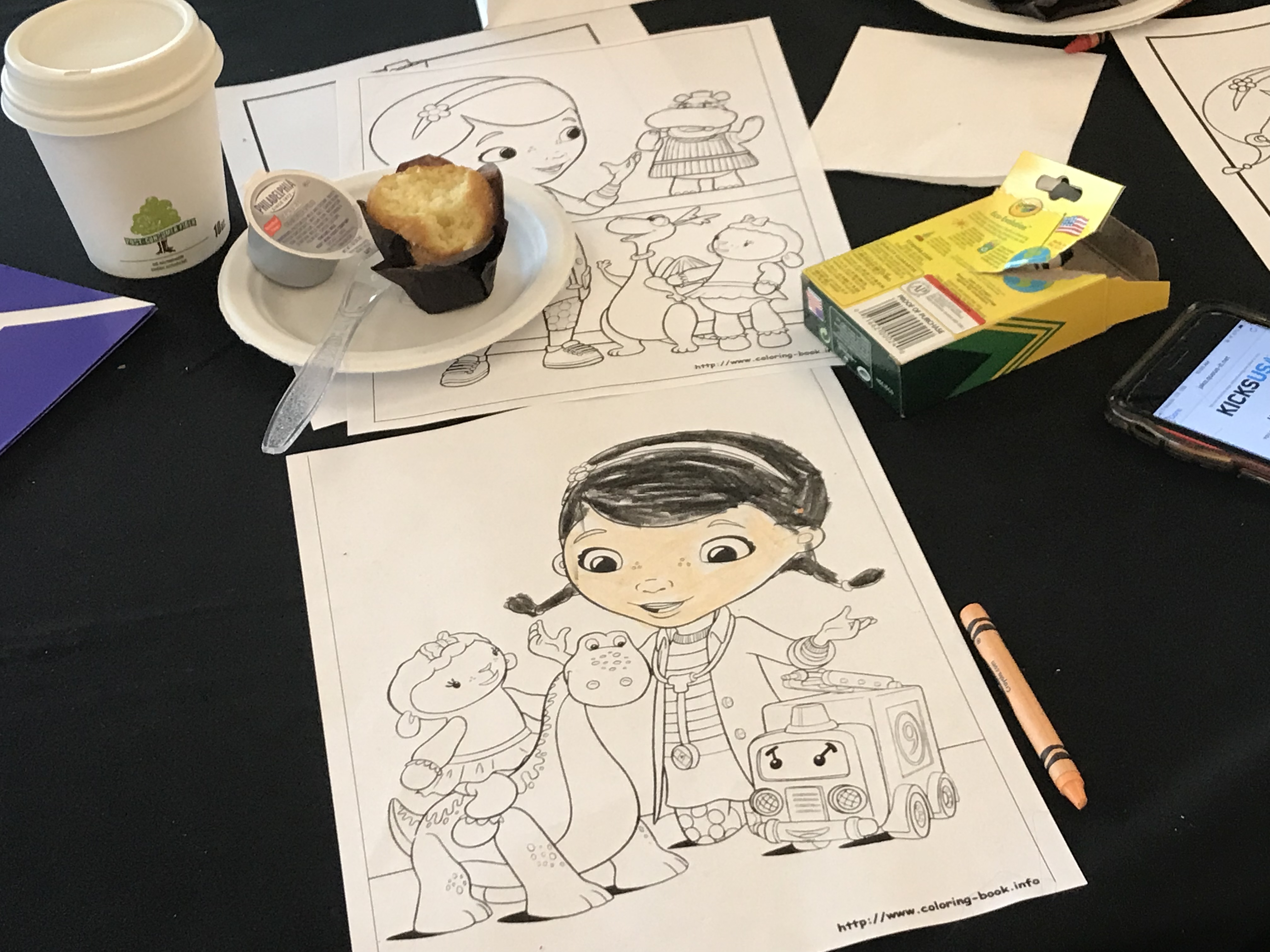 Everyone enjoyed breakfast in a private room upstairs with a lot of fun coloring and other art projects on the side–all of which celebrated the great exhibits on at the center. While many came to be able to check out the highly acclaimed “guest participation” Doc McStuffins and Sherlock Holmes exhibits which only run through the end of January, I was dying to get to the center’s planetarium which has the largest screen in the world at 89 feet in diameter! 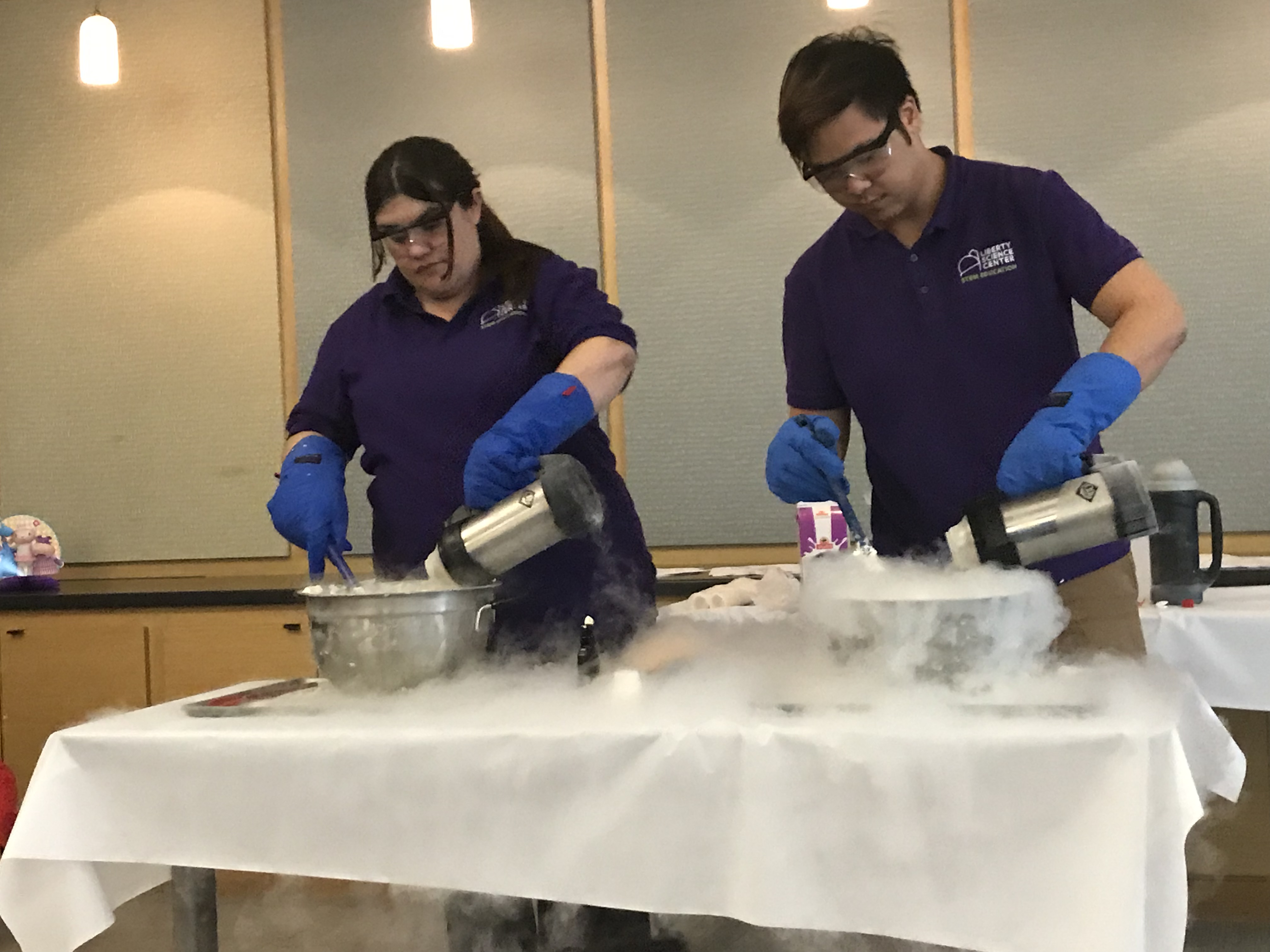 The breakfast included a super fun ice cream making demo which dazzled the kids (they loved the smoke from the dry ice as well as tasting the ice cream) and another which had big fans blow out giant rolls of toilet paper onto all the guests. It took quite a while for everything to remove the TP–especially from under their shoes, LOL! 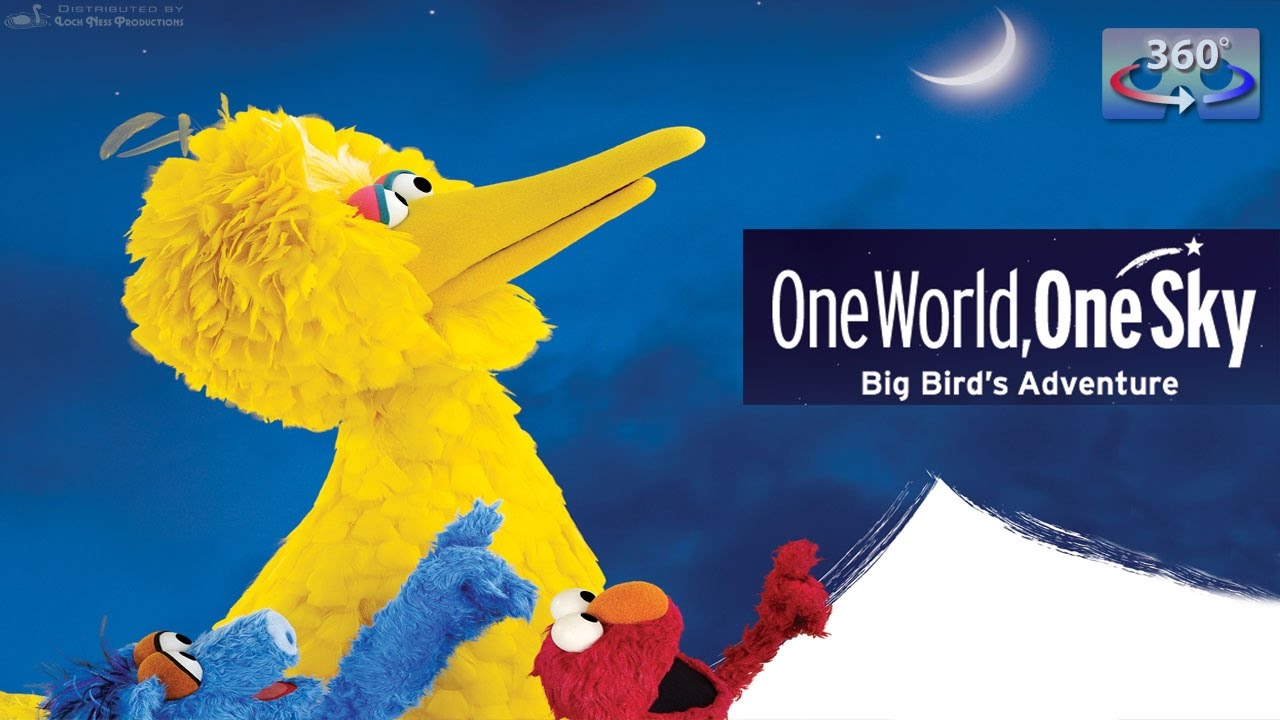 First I took in the phenomenal One Sky, One World: Big Bird’s Adventure. This 360 degree delight was not geared only to kids as it taught a tremendous amount of geography and astronomy and compared cultures around the world. Big Bird had some help from Elmo and some other Sesame Street cast mates and it was a laugh-a-minute seeing them cutting up in space, including jumping up and down on Mars’ surface.

Next I checked out Laser Wonderful which was themed with stupendous holiday designs that almost looked like neon signs. It was very exciting and featured some all tome favorite holiday music including “Rockin’ Around The Christmas Tree” and “Dominick The Italian Christmas Donkey.” Peanuts and other major cartoon characters popped up here and there in unexpected places. It was great to hear jazz, rock and traditional Christmas music in all one places in a world-class sound system. This is honestly the most exciting presentation that I have ever seen in a planetarium anywhere.

The third presentation that I saw was Black Holes, which is actually a movie about how black holes are created narrated by Liam Neeson. Before and after the movie is a live expert on black holes whom you can hear but not see. His lecture and the close up images of real black holes on the giant planetarium screen was beyond fascinating. The audience gets a bird’s eye view not only of how black holes are created but the odd noise that is made that kind of sounds like one Rice Krispie crackling in a bowl of milk. 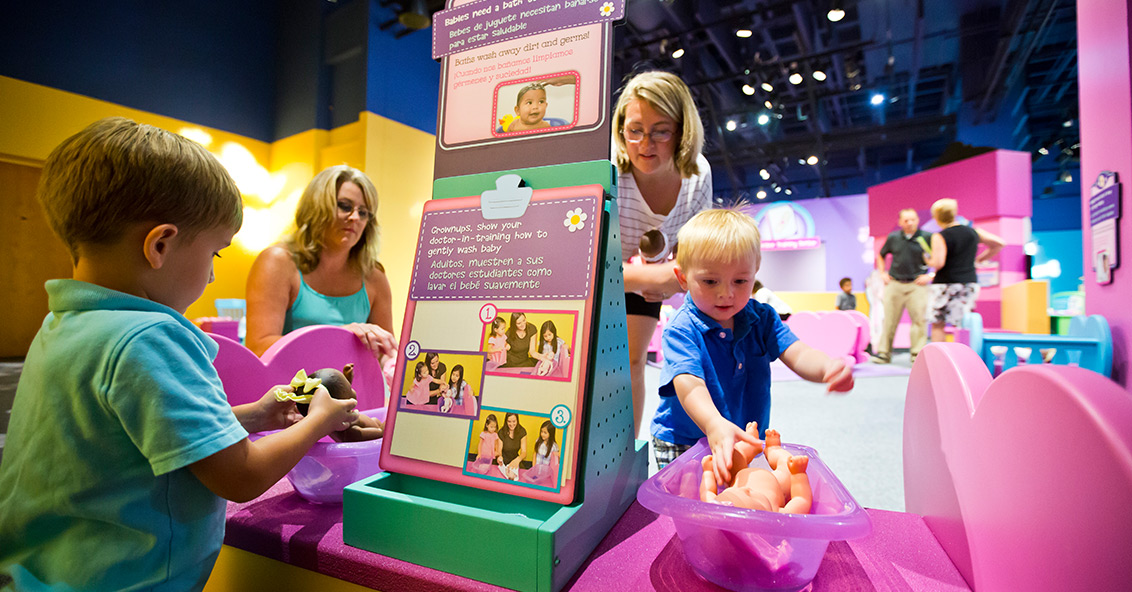 I finally headed over to check out the Doc McStuffins exhibit and oohed and aahed at how much the kids got into it. They got to intermingle with characters and use lots of props–for instance, they got to bring out their inner doctors by giving toys check ups in an emergency room. Some kids were crying when they had to leave, especially after they got to vist the Pet Vet where they got to brush, x-ray, and wash toy pets. (This exhibit is only around until 1/27/19, just FYI–so hurry on over.) 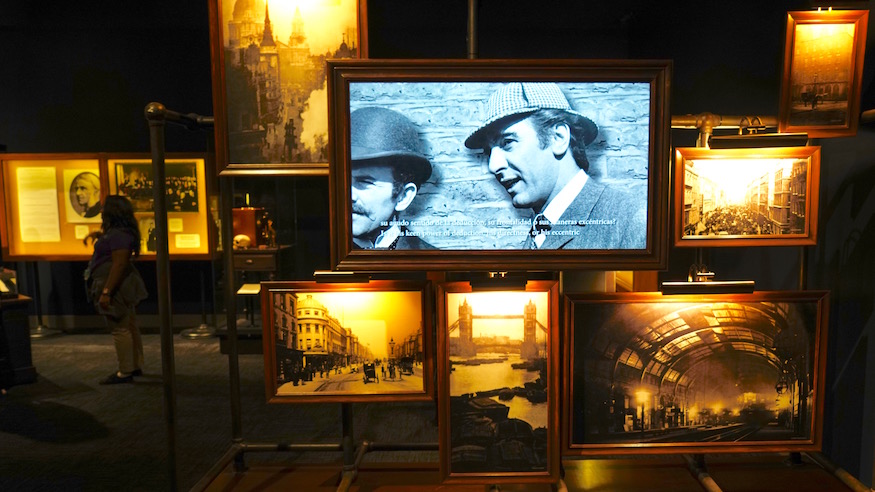 The Sherlock Holmes exhibit allowed the participants to investigate a murder mystery in the ace’s home base of London. It is kind of like walking you way through a giant clue game. Guest have to solve an urgent crime and they chase clues with “personal detective” notebooks in hand. There are plenty of interesting Sherlock Holmes period costumes and movie props to check out just for fun. Guests can even get an upclose and personal look at tools and instruments used by the police back in the 1890s London. (Just fyi, this exhibit is on display until 5/27/19.) 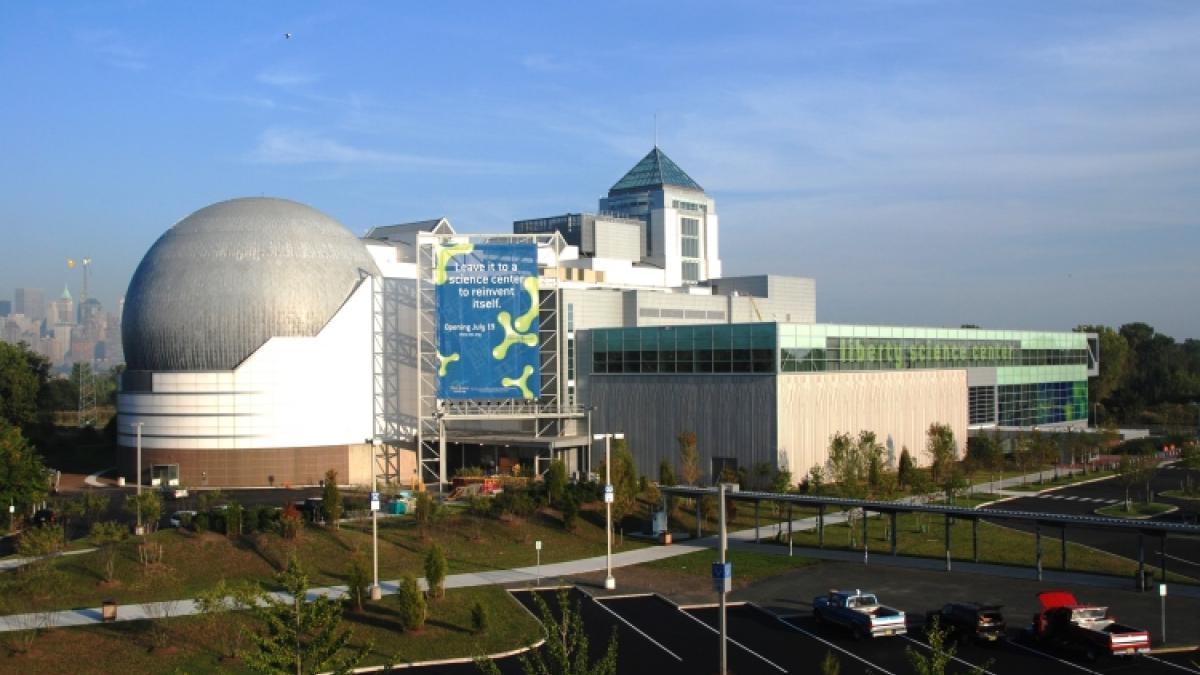 The Liberty Science Center is the type of museum that has all sorts of fun demos down in the lobby–there are especially interesting ones that you can watch from the cafe by the planetarium while you have lunch or a snack. The LSC has private rooms for parties and admission is just over $30 for adults and about $22 for children. For more info, go to www.lsc.org.