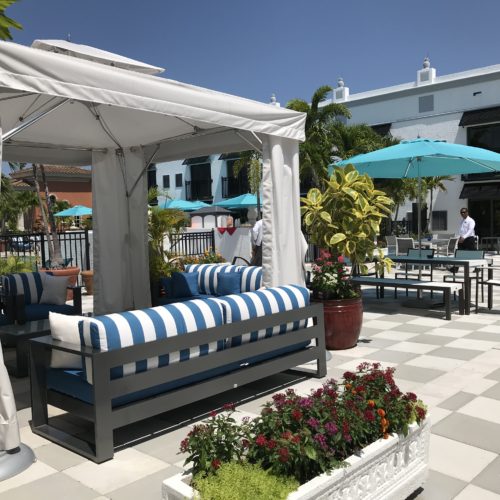 I was lucky enough to do a quick jaunt to the privately owned Four Star Diamond Award Naples hotel The Inn On Fifth this past week. The hotel is located smack dab in the center of all the action, but don’t expect much noise. Naples has strict anti-noise ordinances and the locals like having the reputation of the being the most genteel of the Sunshine State’s larger cities. 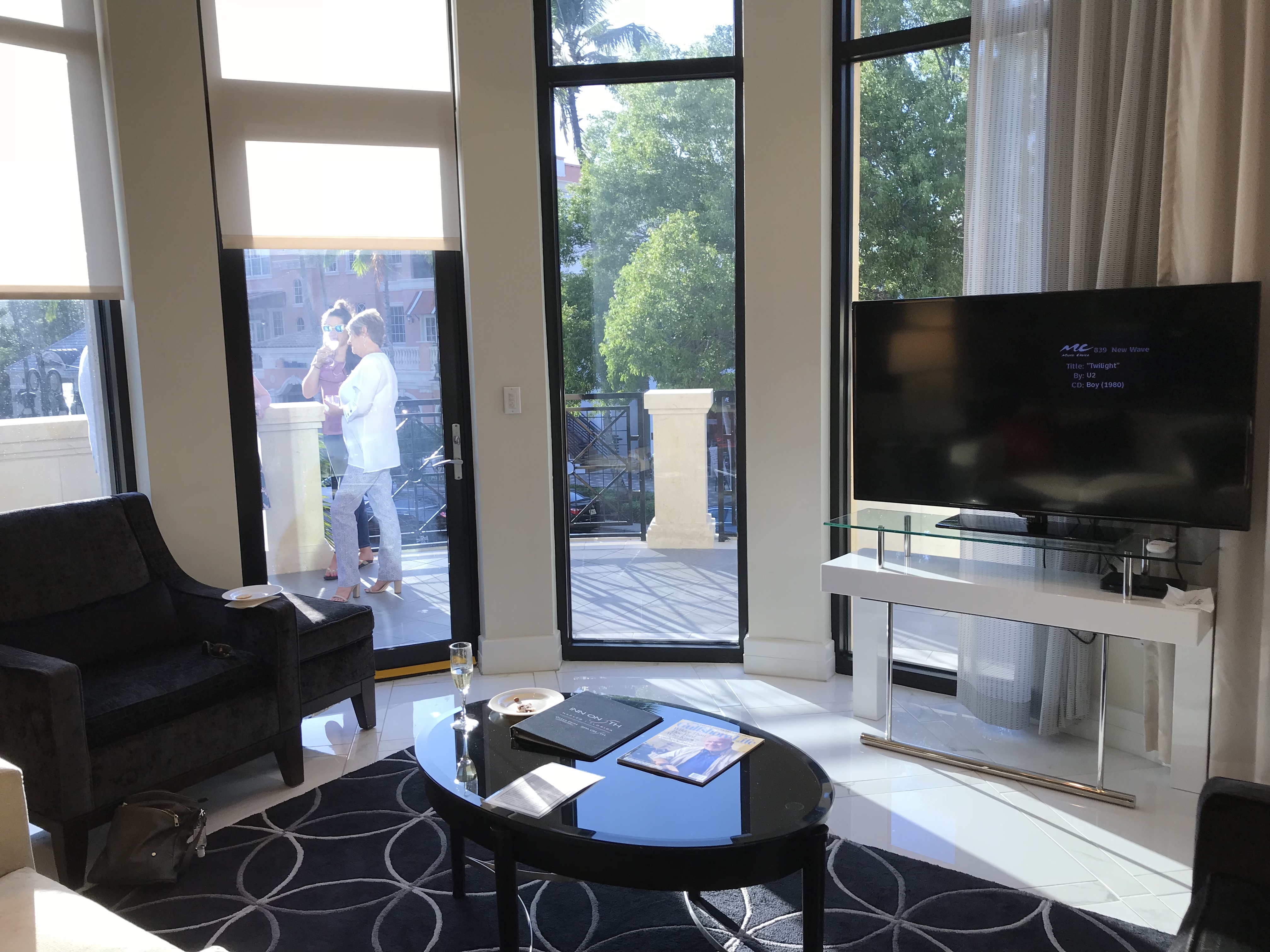 What makes the hotel unique is that it is actually composed of two art deco inspired buildings directly across the street from each other. One building has standard hotel room and one is what they call “Club Level.” Both are three-story buildings with lots of balconies both private and shared. I checked out accommodations on both sides of the Inn On Fifth. The smallest room is still at least 450 square feet with a balcony—over at the Club Level, there are only suites with a minimum square footage of 550. All rooms in both sections of the hotel have huge bathrooms and most have his-and-her sinks, lighted makeup mirrors, blowdryers, L’Occitane toiletries, four-piece boxes artisanal chocolates left on guests’ nights tables during turn down service, the plushest bathrobes of any hotel that I have ever visited and top-of-the-line Stearns & Foster mattresses. Guests staying at Club Level have all-day cold but sophisticated edibles, cocktails, soft drinks and coffee. Directly off the concierge area is a mini office area with an iMac. Guests are welcome to lounge on the sofas and cushy arm chairs all day long and there are people two staff members behind the desk there to make arrangements for sightseeing and restaurant reservations. The Club Level has a jacuzzi and gorgeous lounging chairs on the roof while the main building has a huge pool area complete with outdoor sofas and glamorous nice style umbrellas. 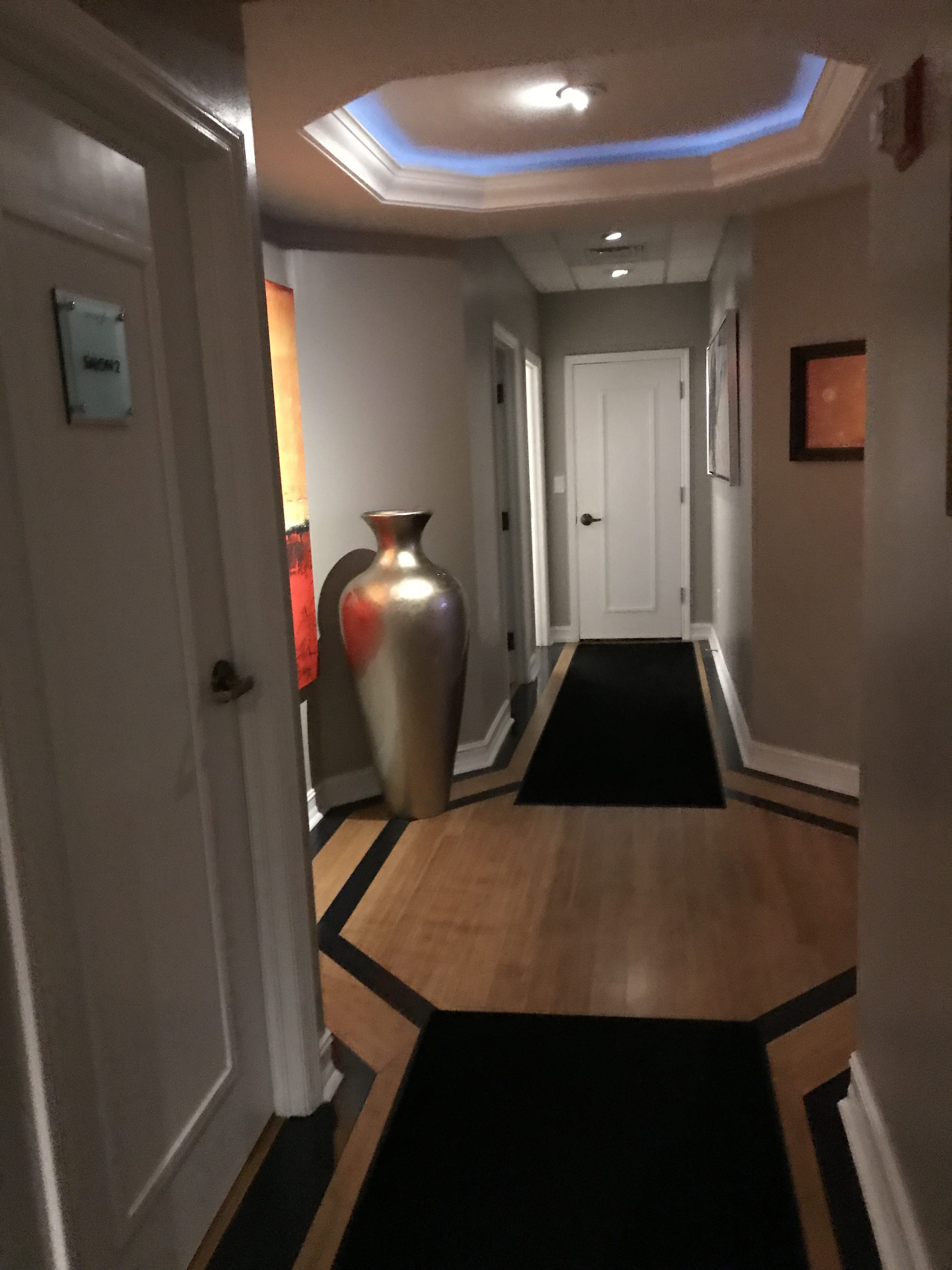 The main building has the Spa On Fifth that has dozens of state of the art treatments. I was totally down for the 90 minute deep tissue massage when I heard it could be customized. Mine included both a “salt glow” foot and back exfoliation and hot stones moved around on my back and shoulders. It worked wonders on my tense right shoulder-blade which is always tender from carrying heavy bags around Manhattan all day. The spa estheticians are super sensitive to your needs and they will ask how they can customize your treatment or do anything better many times during your treatment. The Spa On Fifth is a fully equipped locker room with digital locks, toiletries for everything from hair to teeth, glass showers and a second exit to the fitness club floor. 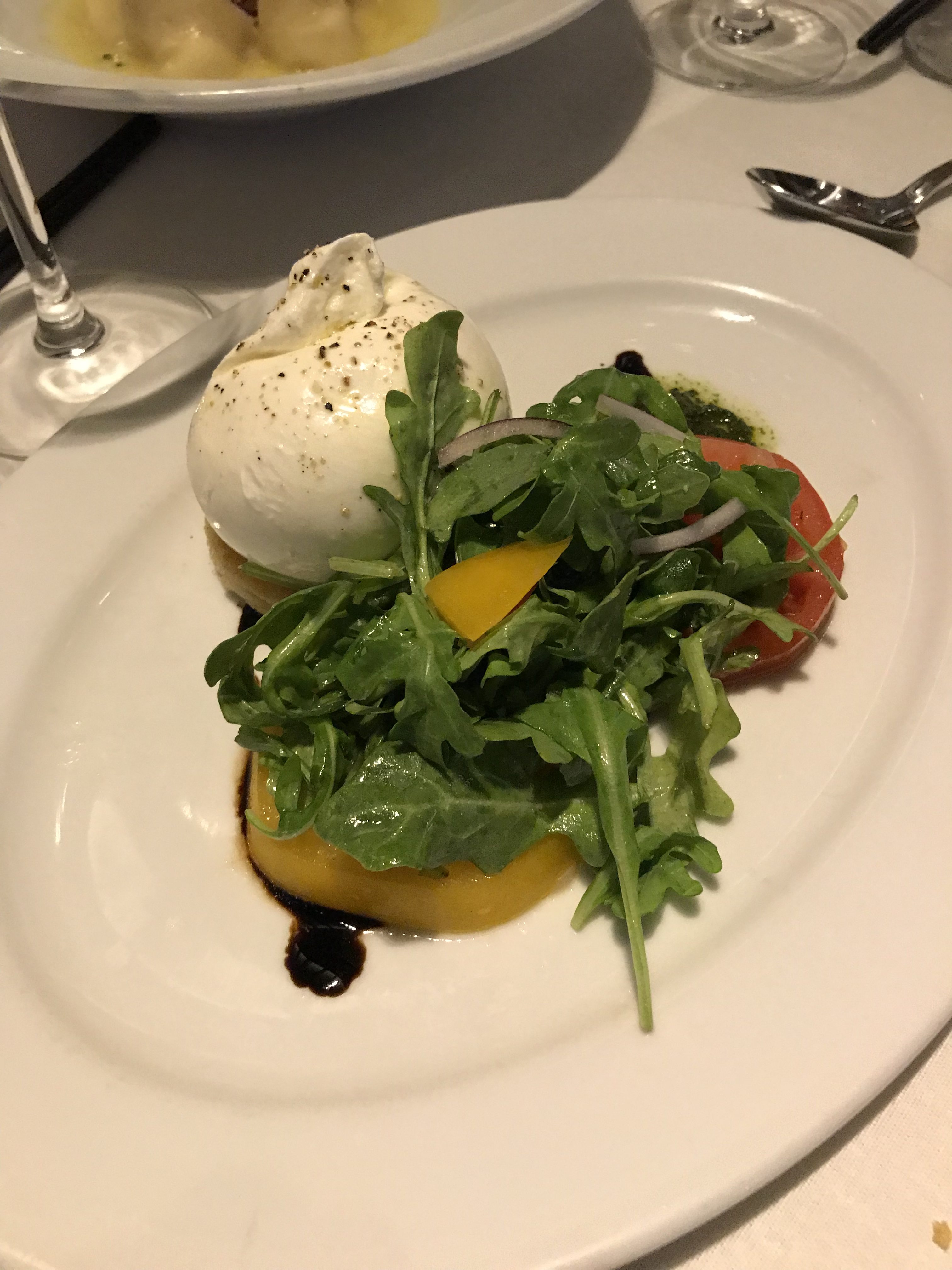 Dining-wise, the main building also has Ocean Prime, a Modern American eatery with world-class steaks and seafood (like their famous Jumbo Lump Crab Cake) and some of the most unusual drinks you will ever encounter. I had their most famous vodka drink called Berries And Bubbles which comes out smoking thanks to clever use of dry ice. I loved that it was truly loaded with assorted berries. I enjoyed their fresh buratta and heirloom tomatoes, then moved onto a flavorful 14 ounce grass-fed New York strip steak. Our table shared several of the gorgeous sides which included jalapeno scalloped potatoes, mac and cheese made with multiple cheeses, and roasted Brussels sprouts. Ocean Prime is famous for its chocolate peanut butter pie, gooey butter cake, 10-layer carrot cake as well as it’s New York style strawberry cheesecake, so we had to share those to conclude our magical meal. To make a reservation or to get more info on this eatery with the largest seafood list in town, go to www.ocean-prime.com. 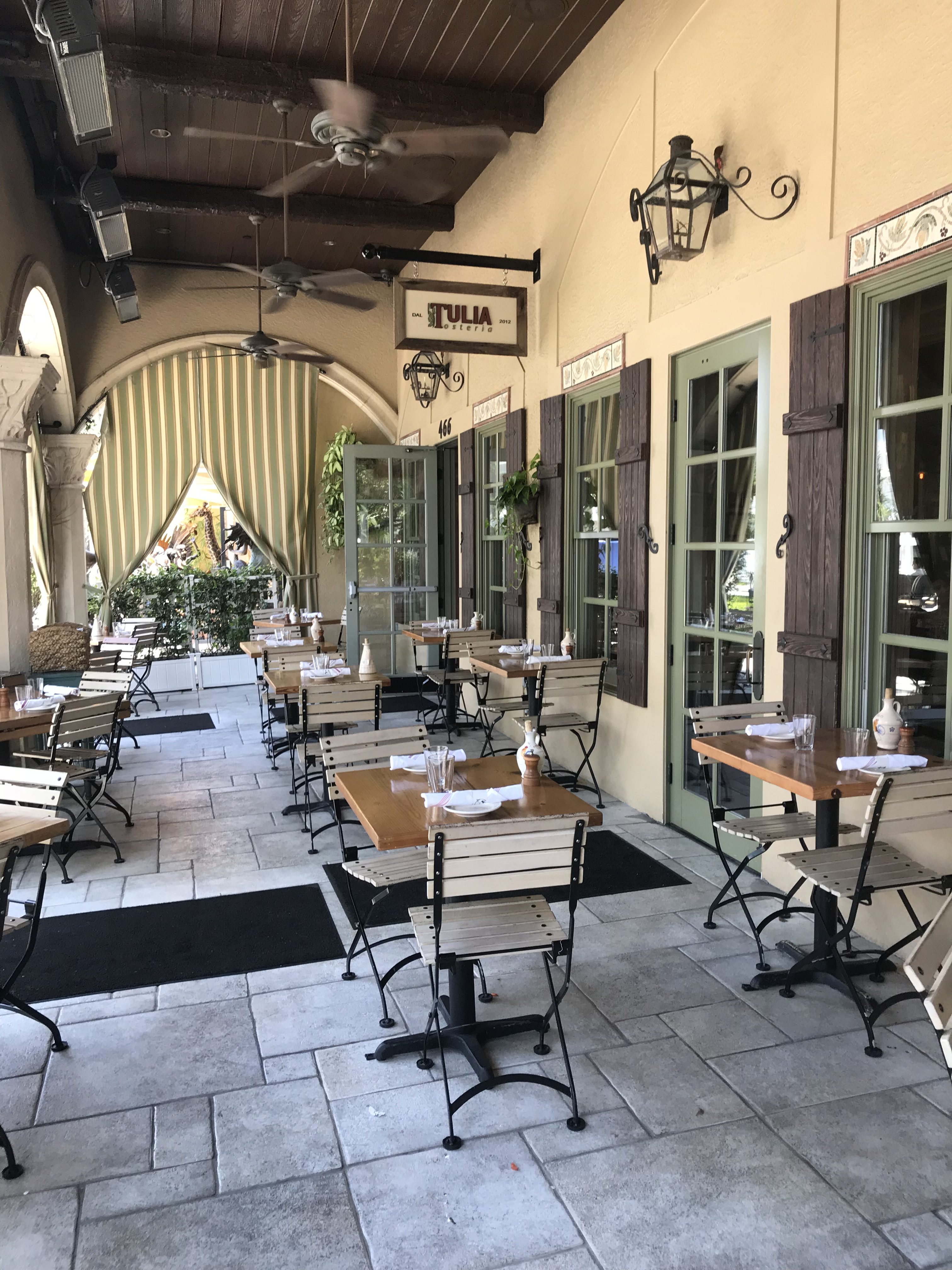 Close to the hotel is another unique eatery called Osteria Tulia (at 466 Fifth Avenue South), which looks like it belongs in the other Naples. Rustic Italian fare is served in a rustic, casual environment and they have been scouted out for shows and special events by the likes of Emeril Lagasse and the James Beard House. They have a “scratch kitchen” where everything is truly made from scratch except for the deliciously dense bread which is delivered from Tribeca Bakery in New Jersey. My visit included my fellow press guests and I sharing a nine-inch pizza called The Parma which was cooked in a brick oven and included prosciutto di Parma, mushrooms, tomato, fresh mozzarella and arugula and fresh ricotta with lovely greens. We then moved on to some homemade pasta dishes that knocked my crocs off. I ordered the Torchio, which was an oversized elbow shaped pasta topped with fennel sausage, roasted peppers, English peas and Marscapone cheese. We then took a tour with the chef of quaint Bar Tulia next door which promptly fills up to the rafters at six every night since it is a cocktail hotspot. For more info on this farmhouse style charmer, go to www.osteriatulia.com. 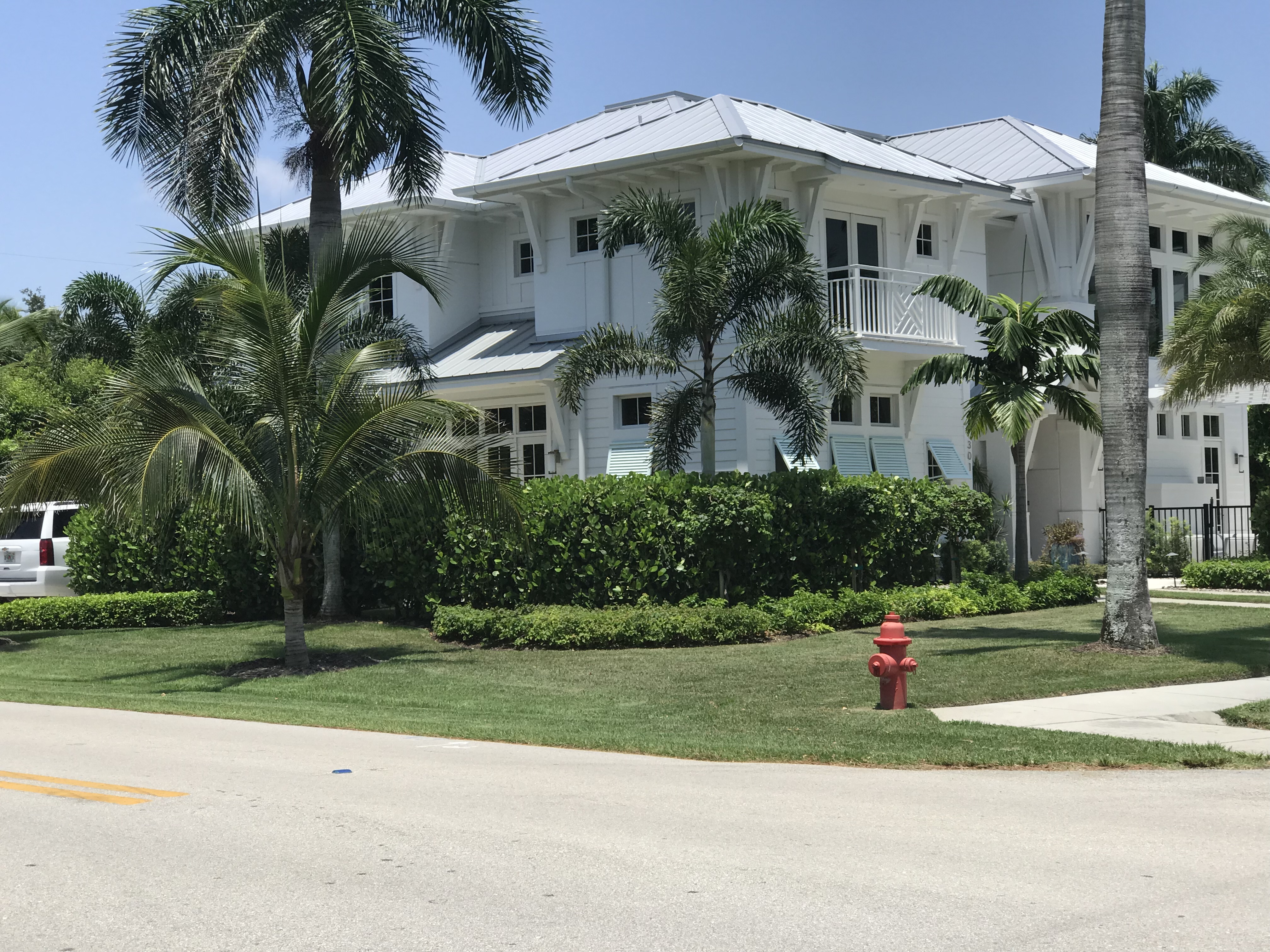 The Inn On Fifth has six passenger golf carts that can whisk you around town to see all the sites including beautiful beachfront mansions that cost $30 to $60 million. Hotel guests get picked up at the nearby Ft. Myers Airport 45 minutes away or at the small private small plane airport only 15 minutes away in a new Tesla SUV or Cadillac Escalade with the hotel’s logo on them. It’s only a ten block walk up Fifth to the beach, but you might as well hop into the golf cart and hear about the local sites from the driver as you whisk by them. For the serious shoppers visiting the area, there are many small high fashion stores between The Inn On Fifth and the beach not to mention several chain clothing stores including Tommy Bahama and Chico’s. 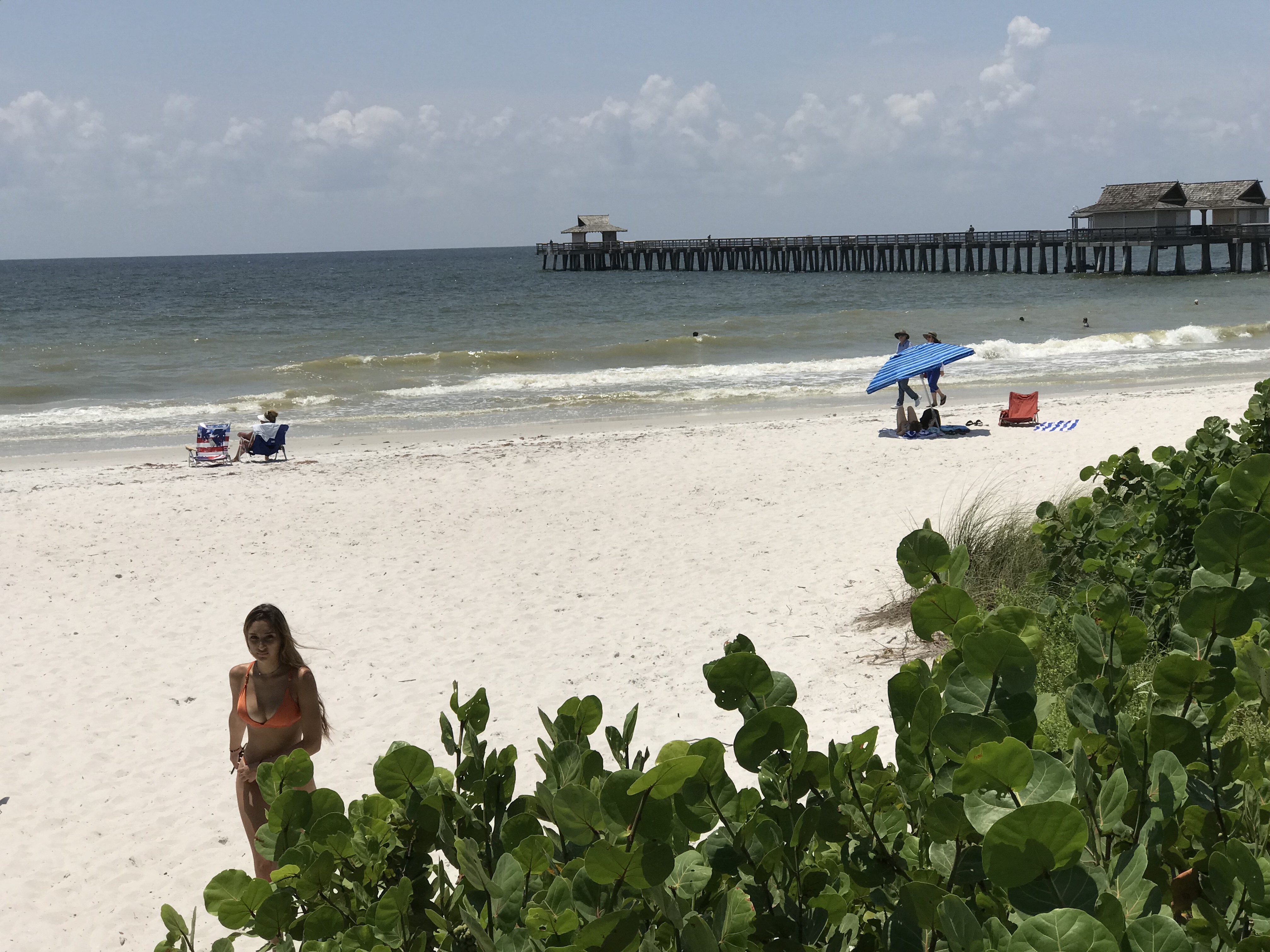 All of the Naples beaches are public even if there is a world-class mansion sitting right next to wear you are entering. The white sand is so clean looking and the water is oh-so-warm since Naples sits on the Gulf of Mexico. The homes may be fancy and owned by many giants of industry but Naples is a highly unpretentious place which will make you instantly fall in love with it. You will probably be like me and just be happy as a clam to take in the spectacular “coastal” architecture of each home as each one is so different than the next. Architecture here is grand but not in the same way that it is in Palm Beach, which is more old school and mimics what is known as the Hollywood Regency look. The houses near the beach in Naples all have many terraces and most have wooden shutters but the style is more on the modern side. It is not unusual to have multiple pools, either. Just above, you can see an example of a home currently up for sale by a New York based couple that I was lucky enough to have lunch in. It was pretty darn hard to get me to leave, especially given the fact that there were several infinity pools and a huge granite island set up for grazing! 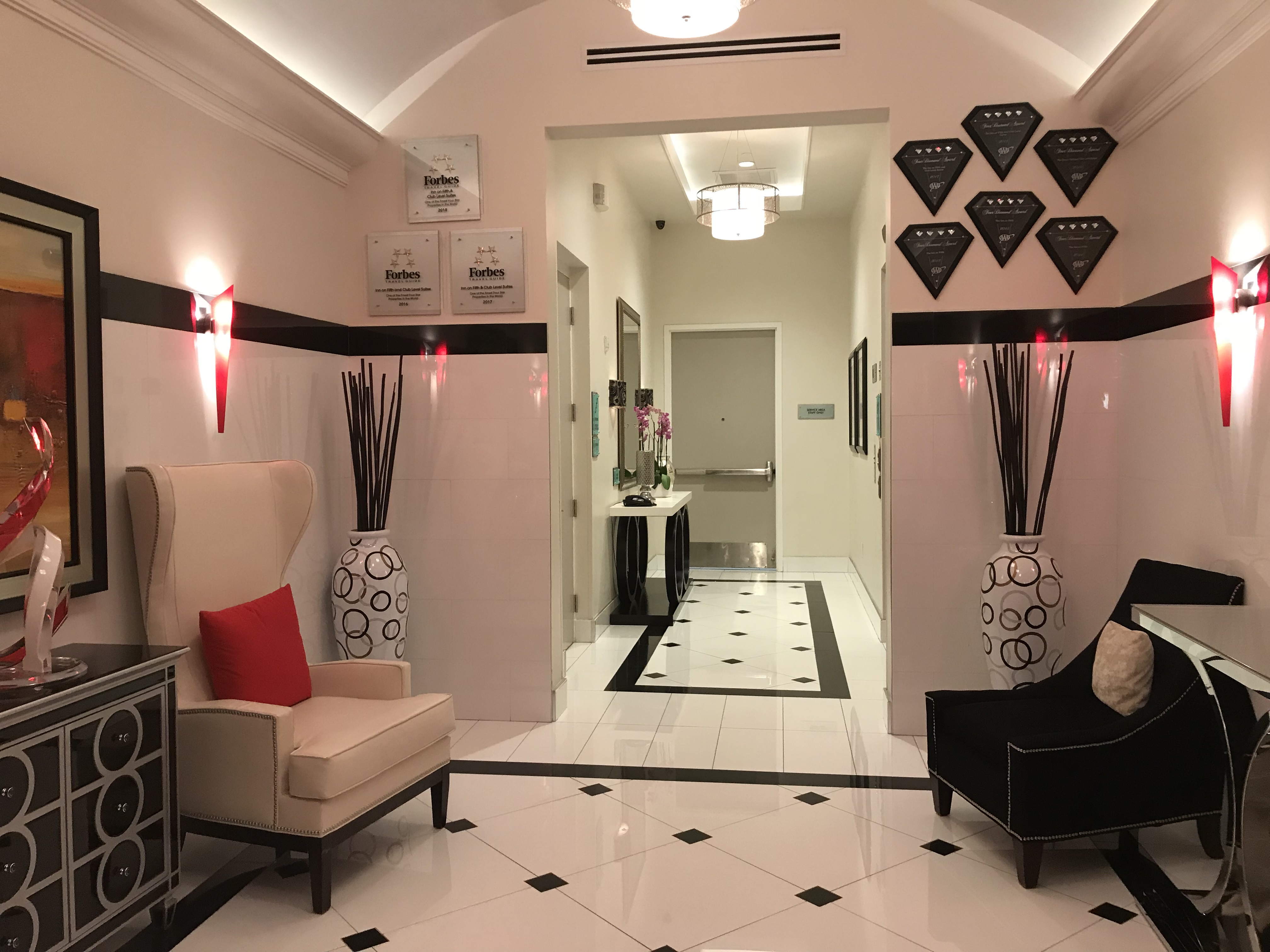 For more info on the Inn On Fifth (whose official address is 699 5th Avenue South and is the recipient of many Four Star Diamond Awards which are on display in the main lobby), go to www.innonfifth.com. It is the anecdote to the crazy, hectic atmosphere of NYC. You’ll also love that you will get to enjoy chic galleries, restaurants, shopping and even going for a run on uncrowded streets with lush greenery (and let’s not forget that you’re also one-half mile from some of Florida’s best “shelling”). 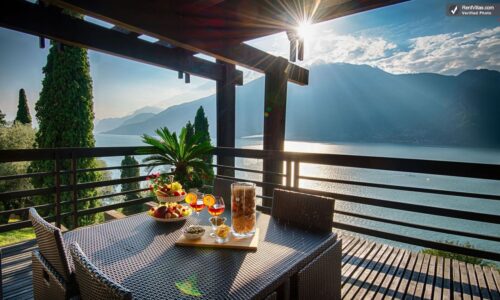 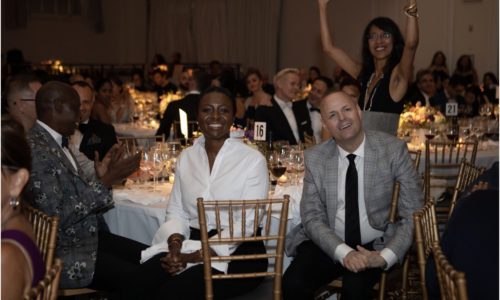 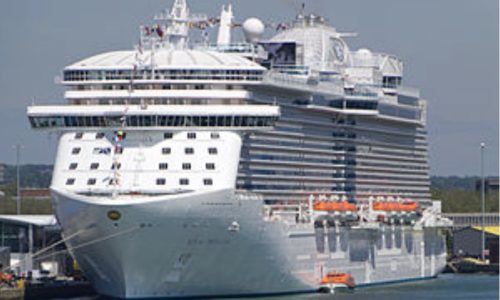