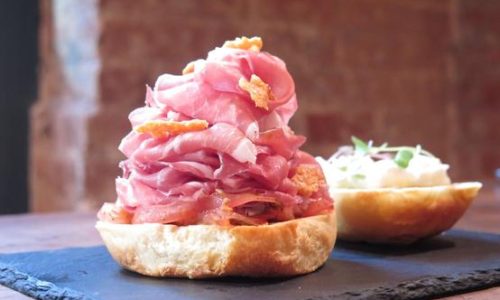 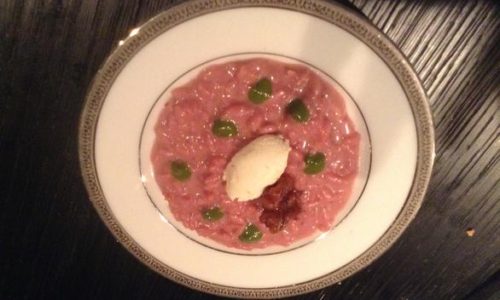 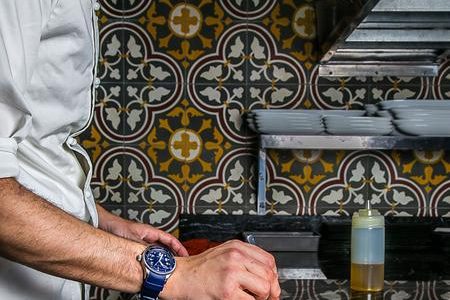 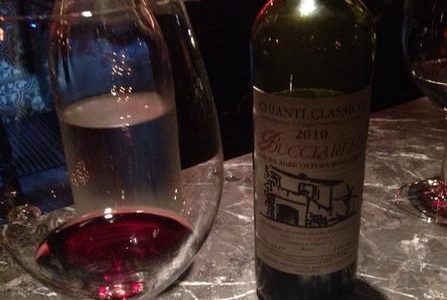 Being of Italian-American descent and having both Northern and Southern Itaian members in my family, I am very fussy when it comes to “real” Italian dishes. Mulino A Vino on 14th Street between 8th and 9th is steeped in both old school Italian traditions (mainly ones from the Milan area where the owner Paolo Meregalli comes from) mixed with clever twists that can only be termed “avant garde.” The chef Massimiliano Eandi just turned 23 and is a veteran of Michelin starred European eateries–including the triple Michelin starred Gordon Ramsay London eaterie Arbuttus–and he never fails to wow at every turn, whether he is creating an Hibiscus Risotto or a Lamb Volcano (this is literally a mountain of freshly herbed slow cooked roasted lamb chops with a Pecorino fondue, and I dare you to find any better lamb chop dish in town)!

The name Mulino A Vino says it all–the owner has his wait staff trained to suggest great wines as a pairing for every course (he grew up in a “wine family”). Wines by the glass to go with each course start at $13 and go up to $500 and Meregalli can give you the backstory on each one as he handpicks them.

At a recent press tasting, our table of food bloggers started out with San Daniele’s Miracle (prosciutto, baratta and tomatao carpaccio on the restaurant’s homemade focaccia buns) and Smoking Salmon (that ultilized wild salmon and saffron perlage topped with an Amarone 2001 glaze and served with a fennel panbrioche). The Smoking Salmon plate literally smoked thanks to a little liquid nitrogen added to the plate right before serving.

For the second course, my mind was blown as I tried the Garden Of Eden ( an Italian mushroom dish with broccoli tempura, black truffle “caviar” and fresh vegetables on baby Romaine),  and the aforementioned Hisbiscus Risotto (which featured the pasta infused in hibiscus and topped with carmelized walnuts, Ivy pesto and Goat cheese with orange zest). Have you been noticing that I have been having two of each course yet, LOL?!

My third course featured Gnocchi Monzese (pan-seared homemade gnocchi with saffron, Italian sausage, zucchini and parmigiano cheese) and Pasta + Pomodoro (spaghettoni Pomodoro cooked inside a Heirloom tomato and tpped with Grana Padana and black garlic). The Pasta + Pomodoro might have stole the whole show at the press tasting the night I went to Mulino A Vino–we were amazed to learn that the pasta cooks in a glass jar. (The owner says it is a trick his grandma used to do in her town outside of Milan.) I have never heard of this before but the pasta was cooked to al dente perfection and the sauce tasted like it was made from tomatoes picked nearby that day!

My fourth course consisted of Polla Alla Diavola (tender, slow-cooked “spiced and spicy” chicken served with a beet reduction) and Lamb Volcano (slow-cooked roasted lamb chops with green pepper, parsley foam, dehydrated black spaghetti powder, mushrooms and Pecorino fondue). The Lamb Volcano’s lamb chopped were grassfed, organic and oh-so-tender. Some of the food journos sharing the meal with me actually had a problem thinking of an equally good lamb dish they have had in the recent past–and these folks have seen and tasted it all!

I ended my meal with Truffle Cheesecake that was so creamy I nearly died and when to cheesecake heaven. The truffle taste was subtle and blended well with the fresh raspberry sauce literally brushed under the cheesecake in a “painterly” fashion like a work of modern art at the Whitney.

The owner and chef are very accessible to guests and super-knowledgable on both the wine pairings and food served at their intimate, candlelit eatery with lovely large modern chandeliers hanging from the ceiling. You get a good clear view for people watching on the colorful West 14th Street, though!

Fore more info, go to http://www.mulinoavino.com.Reservations are requested. The restaurant is located at 337 West 14th Street and is open for dinner Monday to Sunday from 6 PM to midnight. Phone number is 855-343-4513. To say that Mulino A Vino lives up to Meregalli’s vision of “blending food and wine seamlessly” is an understatement. Check it out for yourself and bring foodie friends along that aren’t that easily dazzled–they will have their minds blown 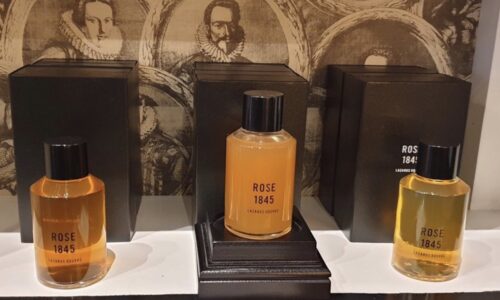