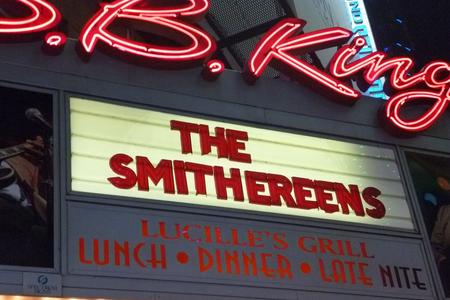 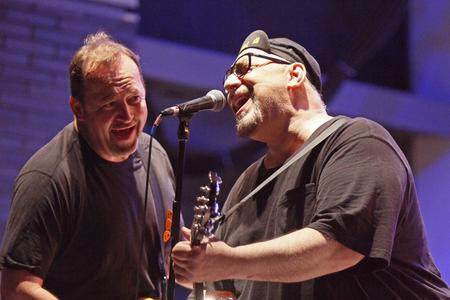 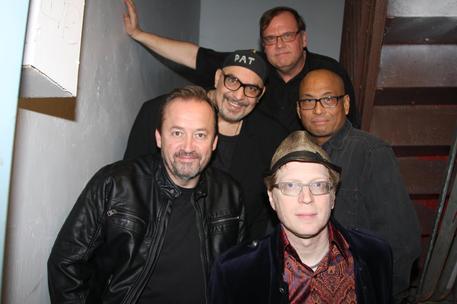 Pardon the pun, but for 35 years, The Smithereens have somehow managed to stick around without falling into “bits and pieces” like other bands in the “classic rock” genre. They are pretty much intact (well, three quarters intact if you count the change in bass players from Mike Mesaros to Severo “The Thrilla” Jornacion about 10 years ago).

They are a band that started with an ad in the NJ music paper The Aquarian back in 1980, and it’s been a long, colorful story since–but their live show just gets more and more intense as time goes on. Time has been kind to these guys and they still have stayed true to their original sound while always sounding current, fresh and original. If you are a longtime fan living in the tristate area, you know that every last Saturday of January is their big BB King’s Show, and the audience lines up on West 42nd Street four or more hours before the show starts, even in the insane NYC January weather!

The guys try to do something a little different each time. The audience gets an intimate view of the guys playing the hits, but this time they will be playing their legendary Especially For You album in its entirety with the help of the extremely talented keyboardist Andy Burton of Ian Hunter’s Rant Band. Burton has also been recording with the Reens’ over-the-top talented skinpounder Dennis Diken (aka “The Duke Of Pearl”) and other hitmakers. Did I fail to mention that Diken has also been touring with the legendary Dave Davies who has wound up living in New Jersey the past few years. I was there a few feet from Davies when he came to check out Diken’s BB King’s performance two years ago–he sat down right before I got a sweaty stage towel in the face from head Smithereen Pat DiNizio and I turned around to see Davies and his gal-pal, journalist Rebecca Wilson, laughing!

Axeman Jim Babjak has promised to bring his famous 1962 red Rickenbacker (which was used on a lot of Smithereens’ hits and on most of the Especially For You album) and a high point of any of Smithereens show is when he comes out in the audience to play with an especially long cord. As he is the standing custom, he lets a fan strum the final chord of the set. Other show highlights are when Diken does “drummer imitations” and the band lines up next to him while he performs and outrageous solo that’s enough to bring Keith Moon back from the dead and say, “Where’d this guy come from?” Journacion’s highlight includes turning over his red bass to reveal his catch phrase “Go nuts!” Needless to say, the audience does just that.

DiNizio told me the key to the band’s success in an interview back in 2010, shortly before The Smithereens did a homecoming concert in Carteret, NJ with old school mates and family members in attendance–and where they got keys to the city from the mayor. (At present, they still have not figured out what exactly those keys open, LOL!) The affable DiNizio told me that the ‘Reens want their fans to get more than their money’s worth and to feel like they are friends, not just fans: “Even going back to the days when I owned by own garbage business, I was always very friendly with my customers and I knew I had to give them more than they were paying for—that is just common sense in terms of business, and that is what the Smithereens do. We give people more value for their money than what they actually pay for because of what they have done for us. They deserve it.”

Time permitting, there is usually an after show meet and greet with the group and you will find that most audience members treat the band like they are old pals–and vice versa. The Smithereens seem to generally love signing merchandise and posing for photos with the crowd. As DiNizio once stated, “You need to like people and be fairly loquacious and hang out with people and sort of embrace that…and unfortunately, most rock musicians I know have ran away from the very people who have been kind enough to buy records they have made and bought concert tickets.”

Tickets for the BB King’s Times Square show this coming Saturday, January 30, 2016 are still available at http://www.bbkingblues.com/bio.php?id=3387. Address is 237 West 42nd Street just east of Eighth Avenue. Advance tickets are $28 while the door price is $33. (There is a $10 minimum per person at the tables.) Doors open at 6 PM and showtime is at 8 PM. If you are a longtime Reens fan, you’ll know that this annual outing is one of their greatest show of the year where they dig up some deep cuts as well as the hits like “Blood And Roses” and “Top Of The Pops.” If you have never seen the band before, definitely come to this gig–every seat gives you an up-close and personal view, and like a couple of years ago, you just might have a band member throw their sweaty towel at you, LOL!