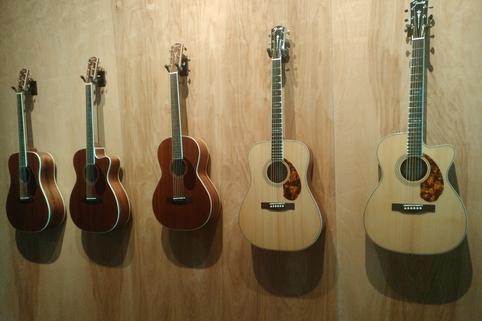 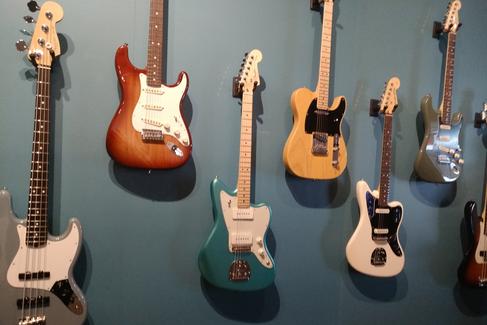 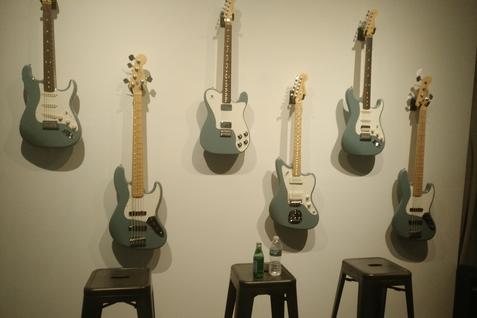 The Fender Musical Instruments Corp folks did a special press preview in NYC at 22 Little West 12th Street in a private event space there before moving onto NAMM in Anaheim on January 19th. They now have offices close to the Mann’s Chinese Theater on Hollywood Boulevard, so lots of axeman stop in to talk guitars and play the new ones on display. (Fender still maintains their headquarters in Scottsdale that they have had for much of their 70 year history.)

Not being a musician, I look at guitars as a thing of beauty or piece of art. All of the new guitars were lined up along the wall and I was impressed by the variety of colors including the three new ones launched this month: Mystic Seafoam, Sonic Grey and Antique Olive. I got to meet with Fender execs who told me that new Fender colors are based on hot car colors of the year–but I have to say I have not seen these luscious colors yet on the road. (I would not doubt for a second that avid car collector Jeff Beck–the axeman who put the Fender Esquire on the map back when he was with The Yardbirds over 50 years ago–has cars in his garage these colors, though. Maybe he put a call into the CEO of Fender last year or something, LOL!) The Mystic Seafoam is to die for, as it has a 1950s Miami beach vibe and looks gorgeous on every model.

I was truly impressed how every model was represented at the press preview I went to last week. There were both right and left hand Stratocasters, the Jaguar (which conjures up images of Elvis Costello and Dinosaur Jr. in my head), the Jazzmaster, the Jazz Bass Fretless, Jazz Bass V, the left and right hand Precision Bass and Precision Bass V. The new amps and acoustic models (one to be introduced at NAMM) were on display as well, not to mention fun merchandise like the fabulous cut off black Strat bookends that I was eyeing for quite a long time–a pair of these are a great way to keep your rock bio collection neat and organized.

Overall, I had a blast even though I am about as musical as a dump truck. I am curious to see if the unusual new guitar colors catch on via the classic rock concerts I go to this year! For more info on Fender Guitars, Basses, Amps, Ukeleles (yes, they make those, too) and their great player-centric features for 2017, go to www.fender.com. The typical Strat or Tele will set you back about $1600 bucks but it goes without saying that they are well-made and will last for decades of playing whether you are in a Broadway play’s orchestra/band or playing death metal, LOL. (ALL PHOTOS BY ANNE RASO.