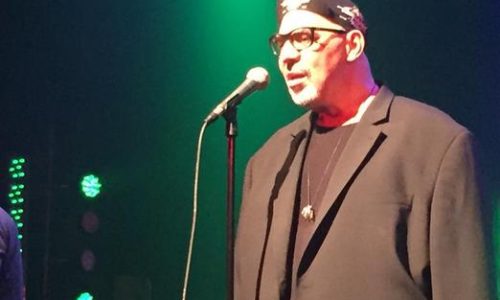 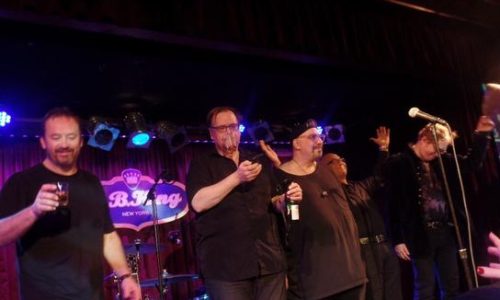 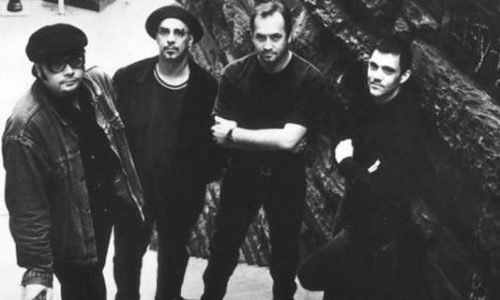 There is only one rock show I MUST go to every year, and that is The Smithereens annual hoe-down at BB King’s in Times Square. It brings together fans from all over the globe to see one of the few classic rock bands that has only GOTTEN BETTER with time, staying try to their original  power pop, slightly garage-y sound with the musicianship at levels so great that solo performers seek out members of the band to tour with them. (Case in point is drummer Dennis Diken, who is kind of the modern day Hal Blaine, playing on many different types of artists’ sessions and behind everyone live from Ronnie Spector to to members of The Beach Boys to Dave Davies. (I actually got to watch Dave Davies come to check out Dennis for his recent solo tour at BB King’s a couple of years ago as he was sitting only a few seats away. I saw him chuckle when lead singer/songwriter Pat DiNizio throw his wet stage towel on my head, LOL!)

If you are halfway hip, you know that The Smithereens were formed via an ad that Scotch Plains, NJ native DiNizio placed in The Aquarian Weekly classifieds back in 1980 (oddly enough, I was writing for The Aquarian back then and often wondered if any big bands occurred due to people meeting up from these famous musicians’ ads)! DiNizio ended up hooking up with three musical friends who met in high school in Carteret, NJ–guitarist Jim Babjak, bassist Mike Mesaros and drummer Dennis Diken. The rest, as they say is history, from their first EP in 1986 called Beauty And Sadness through their Capitol and RCA years, they had hit after hit plus a few deep cuts bubbling under the Billboard Top 100 that are some of their most legendary tracks. The hit material that people are familiar with are the hits “Blood & Roses,” “The House We Used To Live In” and “Top Of The Pops.” After taking a super-long break from studio recording, they came back in 2011 with the highly acclaimed album (you guessed it), 2011! It led the group to an opening slot with Tom Petty & The Heartbreakers who fell in love with 2011 (I am sure he was familiar with earlier Smithereens’ material as well though)–and he personally invited to tour with him in 2012.

“Magic Mike” Mesaros (replaced by the affable and talented Thrilla From Manila, Severo Jornacion) has been gone from the group for 14 years now as he decided to become a chef in the San Francisco area and spend more time with his wife and children. He recently came back on the scene to play a benefit show at a Hungarian social club in central New Jersey in honor of Jim Babjak’s late wife, Betty, who passed away from cancer last year. It was a magical night according to friends of mine who went and at BB King’s, Mesaros will be onstage again! Diehard Reens fans will be missing the Thrilla this year, but it’s a real treat for them to see Messaros after so long in “civilian life”!

You are guaranteed a magnificently rockin’ time when you go see The Smithereens anywhere, but the BB’s show is on an out-of-this-world level. The most die-hard fans are there, and they line up hours before the doors open at 6 to get a good seat. Many of the group’s fans seem to know each other and most of the time, the Reens do a meet and greet and merchandise signing after the show is over (it depends how much time is left after their soaring, sweat-drenched set). You can count on them to play all the hits but there are always a dozen or so “deep cuts” performed at the request of friends and family.

There are still tickets available here: http://www.bbkingblues.com/bio.php?id=7013. This is the best $35 dollars you ever spend (price is $40 at the door though and they tend to seat people as they come in, so get in line before 5 PM for a great seat for showtime at 8 PM). There is never an opening act and doors open at 6 PM. This is two beautiful non-stop hours of musical bliss–and blisters occasionally, as the case may be. To keep up with The Smithereens, check out The Smithereens Official Facebook Page (https://www.facebook.com/groups/92052668353/) or go to http://www.officialsmithereens.com, where you can see all their other concert dates in the coming months. BB King’s is located at 237 West 42nd Street which is a two minute walk Port Authority Bus Terminal, making it super easy to get to if  you are traveling in from neighboring states.

If you have not been “blown to Smithereens” at any other point in your life, now is as good a time as any! (A special closing note: if you are unable to go to the BB King’s show, Messaros will also be on boards for the group’s shows coming up this Friday, January 20th in Philly at World Cafe Live, on Friday, January 27th at Falls Church, VA’s State Theater and on Saturday, January 28th at Annapolis, MD’s Rams Head Tavern.)

I recently asked Babjak if the band had any plans to record another studio album since it has been almost six years since 2011 was released. He told me to “go ask Pat” but it seems like they never get around to writing new material. Everyone in the group does have solo projects and Babjak is a Northern NJ exec by day, rocker by night–plus the father of three boys of college and just post-college age, so he is the one who has the “fullest hands.” Rumors have it that the Reens go into the studio this spring although I cannot get anyone to confirm this!. Don’t give up hope.